The risks associated with smoking have been widely-publicised for years – such as lung cancer and heart disease. Despite this, the additive nature of cigarettes makes it hard to quit for smokers. Over a long period of time, this will likely have a detrimental effect on their health and may require them to seek medical consultation to get the appropriate diagnostics for their smoking-related problem.

Given the enormous pressure the NHS is currently under, smoking-related illnesses only put an additional strain on already limited resources.

Utilising the latest data derived from NHS digital, Vapourcore.com who provide e-cigarettes as an alternative cessation method, sought to identify the 10 locations in England with the highest and lowest number of hospital admissions attributable to smoking per 100,000 of the local population. The figures cover 2017/18 and accounts for those aged 35 and over. 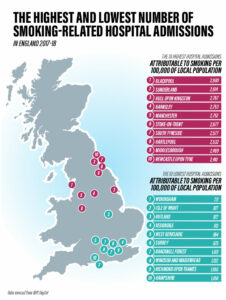 Upon further analysis, half of the locations (Sunderland, South Tyneside, Hartlepool, Middlesbrough, Newcastle upon Tyne) in the top 10 with the greatest number of hospital admissions attributable to smoking are in the North East of England.

Furthermore, an insight into the statistics show that seven (Wokingham, Isle of Wight, West Berkshire, Surrey, Bracknell Forest, Windsor and Maidenhead, Hampshire) of the 10 locations with the lowest number of hospital admissions attributable to smoking are situated in the South East of England.

“The dangers of smoking have been documented time and time again, but it can be incredibly difficult to quit due to the addictive nature of cigarettes. Consequently, it can be tough for individuals to alter their behaviour and preferences but with more effective cessation methods available than ever before, there is strong optimism for those looking to kick the habit. The more that do so, the less chance they will face serious health problems in the future as a direct consequence of smoking.

In turn, this will beneficially reduce the burden on medical professionals and hospitals – as they better look to allocate their time, resources and expertise. This research certainly shows that among the top and bottom 10 locations in England for smoking-related hospital admissions – there is a north and south divide; indicating a lot more can be done to assist those struggling to quit smoking”.