Whatever position you play in football, you need to be able to tackle. But which Premier League players jockeyed, blocked and slid their way to victory (or defeat) in the 2018/19 season? Keen to find out, livefootballtickets.com, an online football tickets company, extracted and analysed data from the Premier League’s official site.

The data developed by Live Football Tickets highlights the most prolific Premier League tacklers and considers each player’s tackle success rate. The research also indicates who it’s likely we will see getting stuck into some full-blooded, technical tackles in the coming 2019/20 season. 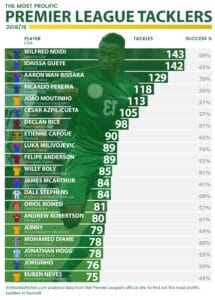 Whilst at Crystal Palace, Wan-Bissaka achieved 129 tackles and an impressive tackle success rate of 70% in the 2018/19 season. No doubt Manchester United are keen for him to bring the same doggedness in 2019/20.

Crystal Palace captain Luka Milivojevic is worth a mention as livefootballtickets discovered he had the highest tackle success rate of all players analysed, in the 2018/19 season, at 76%.

Comparably, players like Jonathan Hogg (78), Jorginho (76) and Ruben Neves (75) tackled the least out of the players analysed.

Interestingly, Wolves midfielder Ruben Neves had the lowest tackle success rate of all players analysed, in the 2018/19 season, at 43%.

Article brought to you by credit https://www.livefootballtickets.com/.