35-year-old Ricky Huntley enjoys free membership at Bannatyne Humberston. He works as an unmanned aircraft system (UAS) pilot and training manager for Bristow UAS. Ricky previously served as a regular in the Royal Artillery for 15 years, following a brief stint in 22 Regiment.

As an air defence operator Ricky was posted to 32 Regiment Royal Artillery to begin a new venture in the world of military UAS. During his army career Ricky served all over the world and completed numerous operational tours including a United Nations peace-keeping tour, a tour of Iraq and four tours of Afghanistan for which he has decorated service. 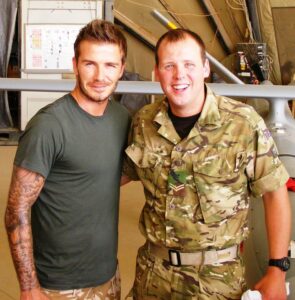 In late 2014, Ricky was medically discharged from the Armed Forces with PTSD, caused by the harrowing scenes he witnessed on Numerous operational tours.

Ricky said: “My first tour of Afghanistan was back in 2005 when I was attached to the Royal Marines to provide unmanned aerial vehicle (UAV) capabilities to the front line. During this operational tour, my team and I were subject to some very harsh and hostile conditions.

“Every day for nearly seven months we found ourselves either directly or indirectly involved with fire fights, helping casualties or supporting friendly forces as they went through, what can only be described as, hell.

“After the operational tour in 2005, people began to see a change in my personality, friends and colleagues would say that I should seek help as they were worried about my welfare. For six years or so, I rejected people’s advice and wouldn’t agree that I had some form of mental health issues.

“As my career progressed, I moved onto tactical UAV systems and was based from Camp Bastion for the rest of my operational tours in Afghanistan.

“Being based from Camp Bastion came with the mental stress of watching friendly forces fighting for their lives. During the campaign, 454 servicemen lost their lives, I lost count of how many repatriations I attended whilst on tour.

“I look back now at the conflict, do I agree with it? Probably not, however what’s done is done and it has shaped me into the person I am today. Although I have suffered I am sure there are hundreds of servicemen who are still suffering in silence, if anyone reads this and would like to talk please reach out to me.

“Duncan’s generosity is a continuing part of my recovery and I cannot thank him enough; that small token of kind-heartedness has given me a place I can release the PTSD stress, train and walk away back to family with a smile on my face.

“PTSD can come in all forms and it can take soldiers to some very dark places. By showing the support he has throughout the country, Duncan may have helped saved a veteran’s life. So, for that I thank you from the bottom of my heart, Duncan,”